La Roldana was a Spanish female artist of the Baroque era (1652-1706). Indeed, she is the first female artist documented in Spain. She was renowned for sorrowful eyes and slightly parted lips which is what you find here with St Joseph.  Christ, as was the convention to show wisdom, is looking somewhat mature.

This carved, polychrome sculpture was suffering losses to paint and general polychromy in addition to surface dirt. Christ had suffered a broken neck and badly executed repair and St Joseph was missing index and little fingers, in addition to suffering a nasty bump to the forehead. Rather than re-carving the missing fingers, which would have been intrusive to original material, it was decided to re-model them instead.

Of particular interest and debate was the correct orientation of Christ's head since he is usually looking more directly at the viewer in Baroque works, such as in the illustration below. Nonetheless, careful inspection of the break lines confirmed that in this case the orientation was more or less correct, if badly executed. 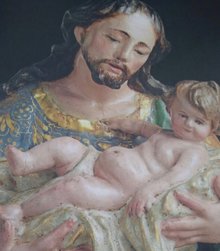 Before and after images.  Please note the fine gilding, polychromy and punch work.